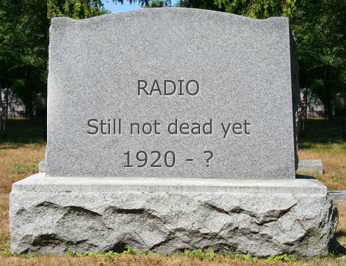 I talk about The Jetsons Future all the time. Recent events have led to me to believe it might be a good idea to address the fact that (1) it’s not here yet, and (2) you have a golden opportunity in the broadcast present to do something about the broadband future.

Once upon a time, a doctor told me I had a slightly elevated cholesterol level on my blood test with these lame words: “Mr. Hoffman, we’re all terminal. Some of us are just programmed to check out earlier than others.” Until recently, I’ve only thought of those words when telling someone about what bad people skills sound like.

These days, I think of those words every time I hear another death knell about the future of radio. I’ll leave you to find your favorite screed on that subject; I’ve spent enough time on client calls addressing the issue. (Hence this post.)

The release of Nielsen’s latest Total Audience Report is, of course, occasion for much more industry freaking out. Total reach is basically flat, remaining in the mid-90% range. However, overall radio usage – TSL for those of us who’ve been around radio for far longer than we’d care to admit – has declined from 60:42 to 58:53 per month in the last year.  If you want that number to sound small, just call it a 3% dip. (And BTW, there’s an app for that calculation. It’s called TimeCalc, and it rocks.) If you want that number to sound big, note that it constitutes a drop of ALMOST TWO HOURS PER MONTH!!!

There are a few ways to look at those numbers: (1) they’re reality; deal with it, (2) radio is still looking at an average of almost 59 hours of listening per month , and the big one (3) that’s a lot of time and usage that you can use to expose your content to your audience while also monetizing it.

Not that this stuff if a big deal, but we’ve currently got Leslie Moonves speculating about selling CBS’ television spectrum. Note that one of his main concerns is this: “”For CBS stations, it may be tougher because taking away spectrum may take away some of the HD quality of some of our sporting events.” Translation: “We’re thinking about this stuff in light of our most unique content.”

You should be doing likewise.

Smartphone use is up among Adults 18+ by 75% in just two years. Adults are watching 84 minutes worth of internet video a week (almost 50% more than they’re watching via DVD & Blu-Ray, by the way). Households with SVOD accounts have jumped from 35% to 40% in the last year.

Broadcast media will eventually become broadband media because broadcast is simply a technology, and all technologies die. Great content will always have a place, and with more ways for people to view great content, more types of content are distributable and monetizable in The Jetsons Future. More notably, as we’ve discussed a time or two, with the change in medium come vast changes in the nature of the message – the content – that can thrive.

Les Moonves is telling you that distribution matters far less than content. A while back, Rupert Murdoch made it crystal clear that the future lies in content.

Given that content is king and that, every year, there are more and more markets for your great content, what do you have that’s unique? What do you have that can be viewed on YouTube, on a smart phone, on an SVOD provider like Netflix, Amazon Prime, or Hulu Plus? What can you write or record that is compelling and that can’t be gotten from anyone but you?

Make something great. Make sure you own it.

Then – and here’s where you, as a broadcaster have a very special advantage – use your current broadcast distribution to build awareness and loyalty of your great content. Leverage those massive loudspeakers we call transmitters to create an appetite for what only you can offer. Do that, and your future will be limitless.

Okay, back to the doctor with the horrid bedside manner. Unlike a certain former presidential candidate, I’m not at all fond of firing people. In this case, however, I might have been just a little happy to seek out a new physician. I’m sure his practice is doing fine without me as a customer, and I’m doing just fine without him, the elevated cholesterol level, or the statins he was prescribing.

I’ve made some adjustments that are intended to extend my time before I become, for lack of a better way to say it, outdated technology, and I’ve implemented a lot of changes intended to maximize the value of the unique piece of content known as “life”.

What are you doing to extend and maximize the value of your professional life?

You and I don’t know when broadcast media will go from terminal to terminated. Take advantage of the time the technology has left to move yourself forward in the era of the next great distribution technology – y’know that thing called broadband internet that is already delivering content to screens on desks, screens in living rooms, screens on tablets/phones/watches, and into speakers in cars.