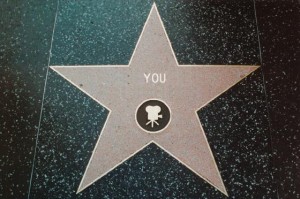 Sometimes, we all need a reminder of things we already know but have a tendency to lose sight of.

Not long ago, Silicon Valley’s newspaper of record did an eight-part series entitled “How Tech Redefines Us”.  One of the eight parts was simply labeled “Fame”.  The writers at the Mercury News compared their own attempt to create a viral video featuring the iChicken with Karen X. Cheng’s “Girl Learns To Dance In A Year”.  The newspaper guys, with a major newspaper group to promote their wares and a little help from Guy Kawasaki, lost the quasi-competition in a blowout.

Again, a clever video idea backed by a newspaper with a circulation over 600,000 and mentions from Apple’s former “chief evangelist” got destroyed to the tune of a 244-1 radio by an unknown.

What happened?  Something entertainers know well.  Two quotes from the Mercury News story:

Telling stories and emotionally connecting have always been the ticket to compelling content.  Always.  (If you haven’t done it yet, take a few minutes to listen to Kevin Spacey’s pitch-perfect thoughts on the subject.)

Bonus note for my many radio friends: After a session at Mark Ramsey’s excellent hivio event, I wrote about the importance of identifying talent that can emotionally connect with an audience.  I got a lot of LinkedIn and Facebook messages and e-mails asserting that it is vital for radio to identify talent that (1) knows how to do “great radio” and (2) is passionate about music.

If you want a great entertainment product, whether it’s a feature film, television series, web series, radio station, or anything else, find compelling talent that can connect with the audience within the context of the story you’re telling.  (You are making sure that you’re telling your audience a story, aren’t you?) Then, make sure your product allows the talent to connect.

If you’re talent, remember these words: In any world, the only relevant content is that which emotionally connects.  In a wired world, the only thing that’s changed is that great stories that emotionally resonate can now reach a much broader audience than ever before.

The challenge before you has never been greater.  You’ve got to stand out from the crowd more than ever before.

Reach has been redefined.  Fame has not.