When Rupert Murdoch Tells You Where The Money Is, Believe Him 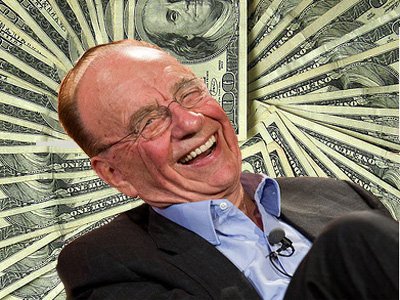 So, when you take together the two big pieces of Murdoch news this week, ask yourself this: in light of that $80 billion offer he made last month to buy Time Warner, what does it say that Fox has decided to unify its studio and television groups – y’know, the people that produce the content and the operation that broadcasts the content – into one group?

Sometimes, lots of quotes tell you most of what you need to know, so we begin with Chase Carey: “As we look to the future of the broadcast television business, it is clear that the best path forward is to operate our creative and broadcast divisions under the leadership of a single team.” And who’s leading the newly merged team?

It’s of no minor consequence that the leaders of the new Fox Television Group are the leaders of the content-making side of the business. The salient quote from incoming FTG Co-Chair/Co-CEO Gary Newman: “In this day and age, you cannot look at the network business as a standalone . . . you have to take a look at the whole picture of a program.”

Variety’s Cynthia Littleton translates, telling us the move “underscores how much the network biz has become the tail that wags the dog of content production.”  If you prefer the words of the NYT’s David Carr, “Distribution, which used to dictate everything, has become commoditized, and it is content that is now precious.”

Speaking of precious content, Matt Parker & Trey Stone are seemingly doing new deals by the quarter to move South Park to increasingly different distribution channels, now adding Hulu to the mix to the tune of $80 million over three years. Adding it up, their content is appearing on basic cable, broadcast television, their own website, SVOD, and now, via Hulu, AVOD.

Dang. They’re making a lot of money to license their content in a lot of places. You know what that means, right? A quote! Here’s theirs: “We do what we do because we act like we own the stuff and try to surf whatever wave is out there.”

Not that this is a new business model, by the way. Never forget who invented syndication and reruns in 1950: Desi Arnaz and Lucille Ball paid the extra cost to have every episode of I Love Lucy taped, instead of broadcast live, taking ownership of the series in the bargain.  How did that work out? (It’s amazing how much context regarding current media developments we get by looking back to 1950, isn’t it?)

There are two simple points here:

First, in an era in which content is being delivered via all those ways that South Park is being delivered, plus plenty more, distribution is solely a means to an end. The end, of course, is getting as many human beings as possible to experience – and pay for – your content.

Second, you might not make $80 million over three years, but you can earn a remarkably nice living making content that you enjoy and that never had a niche in the marketplace until recently as long as you:

Rupert Murdoch has made it crystal clear: Content is king. Content, whether you’re a teenager in Indiana or a major conglomerate, is your real ticket to riches.

Make great content. Own it. Surf whatever new waves pop up and monetize it.