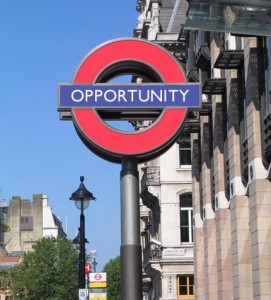 Have you noticed how many “sportswriters” are ending up on-camera at ESPN? There’s a huge lesson in this for all media talent, no matter whether you come from television, radio, or print.

If you’re media talent and you feel like the number of available jobs is shrinking mightily, sadly, you’re right. Jobs are declining in electronic media and in print. A simple logic exercise: if demand for content is increasing (and it is) and the number of people being employed in content creation is decreasing, is there a fundamental disconnect happening? The answer – shock! – is a blaringly loud YES! So, where’s the opportunity for you? Read on, friend.

Here’s what’s happening in print: just last week, four huge operators – Tribune, Gannett, and the newly merging Journal and E.W. Scripps – followed last year’s move by Rupert Murdoch, who split his print business from his electronic media business, forming two separate companies. Yep, four of the biggest print publishers in these United States – all of which own television stations and half of which are also in the radio business (the other half used to be) – are separating their print talent from their on-camera and on-mic talent.

The logic: You take more valuable assets like TV and film and separate them from your rapidly shriveling former print empire. Your electronic media assets, no longer weighed down by the anchor that is print, are free to soar in value, with stock prices ascending toward the heavens. The print assets, meanwhile, are given a chance to sink or swim on their own merits without having to be judged alongside their stronger brethren. (Want to read a good analysis of this stuff?  Here’s one.)

Of course, those companies have just walked away from a ton of exceptionally talented content creators, journalists, who are left to ponder their future in a “dying” industry that isn’t dying at all.  It’s just changing.

The future of media and entertainment is heading in exactly the opposite direction from the one the large print powerhouses have chosen. The era of media convergence is quickly arriving. (Last week, I talked about the solution the course they should be taking, but aren’t.)

Here’s a quick reset on what media convergence means.  When you distill content down to its essence, you have three types of the stuff:

While media behemoths are separating themselves into smaller, Balkanized units, in the real world, the many different types of media are coming together into one giant blob that we’ll call…media. As media convergence becomes a reality, all types of media outlets are beginning to make content that fits all three of these categories. The New York Times is making documentary films. Radio stations are creating editorial content and making audiovisual content. Television stations? Natch.

Media consumers are becoming accustomed to receiving all three types of content from one source. This trend will only become stronger.

Here’s the bottom line for media talent: Fewer jobs in an era of more reach means that (1) you can reach more viewers/listeners/readers than ever before, and (2) that you’d better be able to do so. What you’re seeing in abundance on ESPN – and yes, we’ve been seeing it elsewhere in smaller doses too – is the future in all of media.

Be ready for this stuff by broadening your skill set. Now.

You may be best in front of a camera or on a mic, but are you working on being better able to express yourself in writing? If you’re radio talent, are you learning to work on-camera? If you’re television or film talent, are you learning to work without the benefit of a picture, when you’ve got to use your voice alone to deliver your message? If you’re a journalist, how much time are you putting into getting comfortable with electronic media?

You may be at your best in one particular content sphere, and that’s understandable. However, your audience expects more from you, and the more you can make yourself capable in the others, the better you’ll do in The Jetsons Future.  Whatever you’re most comfortable doing, if you’re a great creative – a great content creator and communicator – you have the innate skills necessary to connect with an audience through any medium; you just have to develop your ability to do it in new forms of media.

Develop your ability to communicate your creative ideas in a compelling way on-camera, on-mic, and via the written word.

I used to manage a very talented radio morning talent who had gotten into the business because she wanted to be “the next Jane Pauley”. She can be. In fact, she’d better be.

Meanwhile, although the quantity of jobs – at least for now – is shrinking, barriers to entry for independent operators are falling. You can create across all three forms of media, and you can reach your audience without a traditional “job”.

Make yourself stand out to your consumers – your fans – in a way that will make them seek out the unique content you have to offer. Because those consumers are now expecting content in all three media forms – audiovisual, audio-only, and print – stand out across all three forms.

Be the content leader for your audience. Be unique. Let them know you’re there – offering everything they like to consume.

If you do work in media, you have the perfect megaphone to shout that information out to your audience. Just remember, with the quantity of media jobs decreasing, take the time now to prepare for the future by developing your skills and your brand while you still have that big media megaphone to help you.