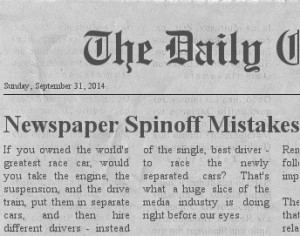 If you owned the world’s greatest race car, would you take the engine, the suspension, and the drive train, put them in separate cars, and then hire different drivers – instead of the single, best driver – to race the newly separated cars? That’s what a huge slice of the media industry is doing right before our eyes.

A couple weeks ago, television was making all the industry news, what with Rupert Murdoch’s moves on Time Warner – now withdrawn (for the moment) – and his own broadcast crew. While those are still reverberating through the media atmosphere, print has moved to center stage.

Lookee here: Journal and E.W. Scripps are becoming one…only to quickly become two in the form of separate print and broadcast companies. Ditto Tribune, which has officially done likewise, retaining its broadcast outlets and spinning its print publications into the newly created Tribune Publishing. These doings come just over a year after the aforementioned Mr. Murdoch – a newspaperman at heart if ever there was one – did the same thing, splitting Fox from News Corp.

Even as I’m writing this, another print legend joined into the separation chorus: Gannett.

Makes sense, doesn’t it? You take more valuable assets like TV and film and separate them from your rapidly shriveling former print empire. Your electronic media assets, no longer weighed down by the anchor that is print, are free to soar in value with stock prices ascending toward the heavens. The print assets, meanwhile, are given a chance to sink or swim on their own merits without having to be judged alongside their stronger brethren. (Want to read a good analysis of this stuff?  Here’s one.)

Just one thing: it’s a terrible idea. Media’s future is heading in exactly the opposite direction.

The Situation On The Ground

While media behemoths are separating themselves into smaller, Balkanized units, the many different types of media are coming together into one giant blob that we’ll call…media.

This is media convergence.

If you’ve read my previous posts on the matter, please excuse this quick reset. When you distill content down to its essence, you have three types of the stuff:

All media outlets used to fit into these three neat categories. As media convergence becomes a reality, all types of media outlets are beginning to make content that fits all three of these categories. The New York Times is making documentary films. Radio stations are creating editorial content and making audiovisual content. Television stations? Duh.

Why then, for the benefit of short-term stock price increases, would you want to toss overboard some of the most important assets you have available to your media company? (And yes, I know I just answered my own question.) The assets in question are not newspapers, which are simply a form of content distribution, and a dying one at that. The assets I’m referring to are your talent: in the case of print, journalists.

A quote from Gannett’s press release on their separation couldn’t be more backwards: “The transaction will create two focused companies with increased opportunities to grow organically across all businesses as well as pursue strategic acquisitions.” Sorry, Gannett. Growing organically in the age of media convergence requires having talent that can create all three types of the above content under one roof. You have that now, and it’s a great benefit to you – a benefit you’re about to divest away.

In a Jetsons Future – an era of media convergence where all content will be distributed via the same means, broadband, unique content is everything. Further, no change in distribution decreases the appetite for great print content; it just makes it more difficult to monetize the stuff. Yet, somebody is going to figure out how to do it, whether through paywalls, which are working for the Gray Lady, or through other means.

Some questions for media companies:

This means a lot for both media businesses and the talent that creates their content.

Bottom line for media talent: We’ll get there. In another post. We’re getting dangerously close to the dreaded tl;dr moment, so let’s stay focused on the business side.

Bottom line for media businesses: Be the content leader in your marketplace. You don’t accomplish that by giving away the talent that creates that content.

If you’re a large radio and television broadcaster in, say, a market like Los Angeles, create your own “newspaper” that’s not subject to those rules because it doesn’t incur the unnecessary costs of printing and delivery. You have the opportunity to hire from the large pool of talent that’s been thrown overboard from the local print media in order to beef up your content distribution portal, er, website and push to be the content leader for Los Angeles. The great Sean Luce can tell you about a broadcast company that did this so well, they dumped their radio stations to focus on their website.

If you’re a smart print operation like, say, the Cleveland Plain Dealer that grabbed an obvious domain name like cleveland.com, don’t treat it like a newspaper website. Treat it like – wait for it! – Cleveland’s content leader. Find the right audiovisual and audio-only talent for your market and make your website into what we now think of as a television station and a radio station. The U-T is doing precisely that in San Diego, and if U-T TV isn’t a rousing success in 2014, here’s guessing they can make it one over time.

Make yourself stand out to your consumers – your fans – in a way that will make them seek out the unique content you have to offer. Because those consumers are now expecting content in all three media forms – audiovisual, audio-only, and print – you’ll need to stand out across all three forms.

If you’re in the media business, you don’t do that by cutting loose the people who know how to make compelling content in any of those forms.