Look! Here's Where You Can Shoot Great Video For Free! 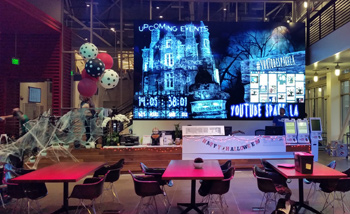 You know how you can know a bunch of stuff, but still miss a really obvious thing until, one day – bam! – the epiphany hits you in the face?

I just got smacked upside the head by an epiphany that should speak to every content creator that doesn’t fit the description of “major studio”. Do us both a favor and follow me down the following yellow brick road.

I’ve yammered away at you about the different ways content creators can make money in a media convergence world.  Whether you’re working in audiovisual (TV and film), audio-only (radio and music), or print, in The Jetsons Future, where consumers are viewing content on a massive variety of screens, all roads eventually lead to short-form video as a key part of your content mix.

Facebook is now showing one billion – yes, with a b – videos per day. YouTube quadrupled that number…two years ago. You don’t need to be Jack Warner to realize that the vast majority of those videos are (1) short-form and (2) monetizable.

All that sounds great, if you’re comfortable working with video. If you’re not, well, help is on the way…maybe.

Brief detour: this week, I’ve had some interesting discussions with an old radio friend who gets the concept of media convergence. He’s doing short-form news commentaries in all three media forms, audiovisual, audio-only, and print. He’s also begun to syndicate those commentaries…in all three formats, which is incredibly impressive. He’s not particularly experienced with video, yet the quality of his work, while not mind-boggling, is easily slick enough to allow him to make his points (and end up on the website of at least one top-100 newspaper).

When I told him what I thought, his response was something like this: “You’d be floored if you saw what I’m using for a studio.” Actually, having managed a lot of video creation in pretty raw radio-type situations, I wouldn’t be.  (And I just looked, a former project of mine is closing in on a couple million YouTube views – hardly mind-boggling, but pretty impressive for a group of radio broadcasters trying to figure it out in their spare time.)

Back to our main point: the nice folks who plopped free-use studios down in L.A., London, and Tokyo have just cracked the seal on YouTube Space New York.  The facilities are state-of-the-art and, yep, free once you’re qualified to use them.

Qualifying is pretty straightforward: roll up 10,000 subscribers to your YouTube channel, get into a rev share partnership with YouTube, and you’re there. And when I say you’re there, I mean you’re there. You’re eligible for facility use, equipment training, post-production support, and workshops on stuff like audience development within the short-form video environment. For free.

And now, the quasi-drawback: good luck seeing the place before you’ve got that 10,000-subscriber channel. There’s a Happy Hour party with some frequency. You can get a sense of the place; just don’t expect a tour of the facility. I dropped in on a recent Happy Hour and asked. The response? “Sorry, we don’t give tours to anyone without a 10,000-subscriber channel.” That, of course, led me to take a self-guided tour of the facility – it’s amazing where you can go when security thinks you look like you belong there – that convinced me that, despite the attitude I experienced, what you get is well worth making the commitment to build up a YouTube channel.

So pretty much all you need to do is convince 10,000 of the 1,000,000,000 unique YouTube users (or 0.001% of them, if you prefer) to subscribe to your channel. If that sounds tough, think about how many users you’ve persuaded to like you on Facebook, follow you on Twitter, etc. The radio station that’s closing in on 2,000,000 views has just under 900 YouTube subscribers…yet, to my knowledge, it’s never asked anyone to subscribe.

And sure, YouTube is doing this so you’ll produce great content that will draw consumers to their website, which is a problem for you because…well, I can’t think of why that would be a problem. (As long as you maintain ownership of your creative works, of course.)

Here’s a bonus reason to keep your eye on this stuff whether you’re an individual talent or a large company: the New York version includes a Google BrandLab. If you think it’s a place where content creators and brands can work together on branded content (or native advertising, if you prefer), you’re quite right.

Translation: let’s say you’re an established internet presence like, er, Bethany Mota. You’ve already got your clothing and fragrance lines, so perhaps you’d like to sit down in BrandLab and toss around some ideas for a makeup line with several interested parties. Let’s say you’re not an established internet presence, but you’re used to working with brands to promote their product. BrandLab just might be your ticket to financial support from those brands.

Translation #2: let’s say you’re a mid-sized broadcaster with compelling on-air talent and you’d like to sit down with some major national brands and find ways to  increase incoming revenue from, say, Taco Bell. Get your butt in the door at YouTube Space, and you’re going to get that opportunity…while broadening your brand’s reach into digitally-distributed audiovisual content.

If that doesn’t sound like a no-brainer, I don’t know what does. (Oh, and if you’re a mid-sized broadcaster that wants to travel down that path, do us both a favor and invest enough – in time, money, and personnel – to make this a winning proposition for you.)

If you’re not used to making video as part of your creative endeavors, this stuff may be a shock to your system. Of course, if you’re in showbiz and you’re not experiencing regular shocks to your system already, you’re in need of a healthy jolt about now. The nice people at Google are offering you the opportunity to enhance your game exponentially.

Grab onto that opportunity and don’t let go!