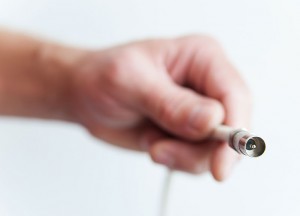 Mere months after I wrote this diatribe regarding the dim fate of the MVPD business, I officially became a cord-cutter. Today, I’m undertaking a radical, counter-revolutionary act and uncutting the cord…(probably) for a whole four months.

Why? There’s something that I want badly enough, that I’m passionate enough about, that I’m willing to deal with the cost and nuisance of the MVPD experience, and there’s a lesson – and not quite the one you’d imagine – in this.

The something in question is one of my great passions in life, college football. After all, I started last season with a trip that took me to six East Coast games in six days. From September through the first weekend in December, if I’m not at a game (or a tailgate party), I won’t be watching one on television. I’ll be watching four or five games at the same time. I love baseball, basketball, and hockey – but not enough to do six days and 2,000 miles worth of driving (much of it after midnight) in order to do a trip like that.

College football games are spread across numerous cable outlets, and I can’t get them all in one easily acquirable package, so I’ll be plugging back in. Shocking news: unless I’m stunningly satisfied with my $60ish/month cable package, I’ll be gone again in four months, presumably never to return. (Here’s projecting that, one year from now, someone will have figured out how to package enough specialized, high-demand content – in my case, live sports – to make it all work.)

Here’s what didn’t happen in my eight months without cable or satellite television: I didn’t die. I wasn’t bereft of great entertainment options. Frankly, I’ve had the cable box sitting in my living room for a week, and I haven’t felt motivated to plug it in yet.

Here’s what did happen in those eight months: I survived missing my beloved Lakers, L.A. Kings, and Dodgers (and I learned to listen to AM radio around 7pm, so I could hear the great Vin Scully for an hour). I watched a lot of great stuff on the usual cord-cutting suspects (and I loved a lot of it, particularly The Unbreakable Kimmy Schmidt). I became quite fond of my new friend, Roku.

Some semi-surprising lessons from my experience:

If I were in the MVPD world, I wouldn’t fear cord-cutting. I’d be absolutely terrified of it.

I’m a member of the first generation that was raised on television. I work in entertainment. Yet, I didn’t miss my 200+ channels in the least.

In a world of phone trees and waiting in a customer service lobby for an hour, I came thisclose to choosing to spend my Saturdays in sports bars rather than reestablishing service. Satellite providers absolutely refused to give me a no-term contract without my spending hundreds of dollars to buy their equipment. That, of course, is a joke. Cable is stunningly annoying to deal with – ask me about the offer to add TV to my internet-only package for $10 a month, which unsurprisingly was a pathetic bait and switch tactic.

So, in a world where cord-cutting and cord-nevering are the new normal, what should you be doing right now? Why, I’m glad you rhetorically asked:

Most important of all, I’d make a point of realizing that, in the new world of entertainment and media, passion wins.

Make sure you’re inspiring passion…and not the kind of passion that says, “I’m done with you!”