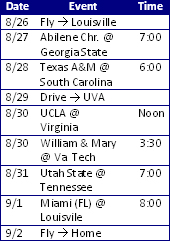 The itinerary for Football Trip 2014

It’s summer, meaning it’s time to take a little vacation from what we usually do. In fact, there’s scientific backing for the proposition that our brains – and particularly our creative brains – regularly need the reset that comes from vacation.

Over the last few years, I’ve attended more graduations than I can count at everything from high schools to major universities to law schools. There’s one piece of advice that I heard every single graduation speaker give: have a hobby. Find something (or, better, some things) besides what you do for a living that you are passionate about.

When we get to the allegedly fully grown-up stage of life, it’s easy to ditch that advice because work is just too dang important. That’s a mistake.

So, FWIW, here’s one of my hobbies: college football. I’m not just referring to the games, though I love those, but also to the whole culture that surrounds the events known as football games at colleges across America. I love getting to the tailgate parties hours before kickoff and interacting with everyone I can, getting a feel for each stadium and fan base.

I could tell you stories about my trips to Texas A&M, Nebraska, LSU, and on and on. I could tell you about the time I went to see Oregon and Oregon State play home games on the same day…as the remnants of a Pacific Ocean typhoon blew through Eugene and Corvallis. I’ve even found a way to attend two games at the same time. (Hint: it involves two Division 3 programs with stadiums a quarter-mile apart.)

At some point, as a member of the media, I ended up joining the Football Writers Association of America, and I regularly think about writing sports again just for fun. (Actually, last season, I wrote a weekly college football column that no one saw – except for me. I hadn’t planned it, but on the Sunday morning of Week One, when I woke up and was in that haze between sleeping and starting the day, the column started writing itself, so I went with it.)

This year, when I saw my beloved UCLA Bruins opening up at Virginia, it was just a matter of how many more games I could squeeze in around that one. So…five games (plus however much of the Virginia Tech game I can catch while I’m driving from Charlottesville to Knoxville) in six days. There’s also 1,700 miles of driving, a stop at a legendary Civil War battlefield, a visit to the Louisville Slugger Museum, and a family visit along the way.

Okay – I’ll cop to it – there will also be some media business to be done, which is an automatic when you’re traveling between lots of media markets. Sometimes, we even need to take a little vacation from our vacation. I’d tell you that I was going to blog about the trip from the road, but I learned long ago that I’m not about to slow down in order to write anything that doesn’t involve time-critical business.

I’d very much enjoy hearing about what you do to help your brain reset. (Oh look! There’s a Contact page on this here website.)

Here’s hoping your summer includes some memorable time doing something you love.