Time For Television To Fight The Right Fight 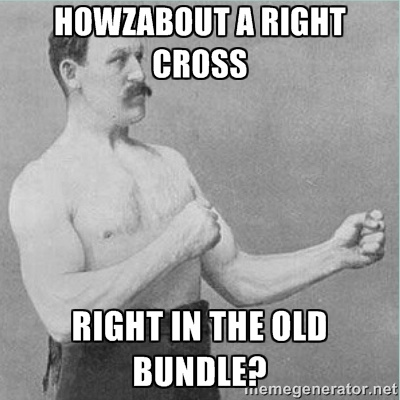 In the aftermath of a record-setting boxing match, let’s talk about fighting. Here are several recent, seemingly unrelated developments. See if you can find the common thread.

These developments have nothing in common…well, except for one little thing: the future. The Jetsons Future, if you will. Let’s rewrite my summary of those three developments in a way that makes far more sense:

Now it all makes sense, doesn’t it?

Entertainment options are becoming so diverse that a six week-old New York Times list of cord cutting options is already outdated. We’ve seen an apocalyptic, if self-interested, declaration out of Maker Studios that linear television would be functionally dead within ten years. Meanwhile, thanks to Periscope, the sky is now allegedly falling in that singular entertainment category we thought couldn’t be disrupted: live sports. At minimum, producing a live sports broadcast may now require a certain amount of playing Whac-A-Mole with the Periscopes and Meerkats of the world.

Three simple words: nothing is safe. Nothing.

Here are some stark realities: more than one in every six households that watches Netflix or Hulu has cut the cord. That number grew by 37% in 2014. Anyone with a smartphone is 2½ times as likely to cut the cord. Nearly two-thirds of Americans now own smartphones.

Now, face reality. With more entertainment options available from more places, unbundling will never stop. In a world where the average cable household watches 17 channels, shoving an additional 172 channels – and yes, the average cable household gets 189 channels – down your average subscriber’s throat in order to justify a stratospheric monthly bill just might be contributing to cord cutting (and cord nevering).

Content consumers want what they want. Once upon a time, we could give consumers what we wanted, and with their limited options, viewers/listeners would have to accept what they were given. With the massive – and growing – number of entertainment options provided by broadband distribution, that’s no longer the case.

Your fans – your consumers – are not signatories to your contracts regarding distribution of your content, and they do not care about them. Give the people what they want. Otherwise, they’ll go find someone else who will give them something else that they’ll want.

Said differently: give the people what they want. They don’t need to bend to your will any more, and if you don’t give them what they want, they’ll take their wants elsewhere.

And what of Periscope? How does it fit into this puzzle? Let’s state the obvious: piracy, whether of the Periscope, Popcorn Time, or torrent-based variety is repugnant in the extreme. Unfortunately, it’s never going away completely. That having been said, it seems that offering “good legal alternatives”  reduces it substantially.

Perhaps the idea is to stop fighting the fights you can’t win and move on to the fights where (1) you occupy the moral high ground and (2) you can (for the most part) prevail. Stop wasting time and precious resources fighting to preserve contracts that serve you instead of your customers. Instead, spend your time and resources where you can win, fighting to preserve the interests that serve you and the vast majority of your law-abiding customers.

Piracy is unacceptable. Unbundling is (for many content creators and MVPD’s, anyway) undesireable. Both, however, are unavoidable.

Perhaps they’re not as unrelated as they appear. It’s time for all content creators and distributors to (1) give customers what they want at a price they’re willing to pay and (2) wisely use more resources on some other fights.

The words of Greg Maffei, uttered at last month’s Milken Institute Global Conference say it best without saying it: “I don’t think the cable bundle is going to crash in the next six to 12 months.”

Agreed. And after that, all bets are off.