Be Unique Or Else: Television Learns That Broadcasting Has Given Way To Narrowcasting 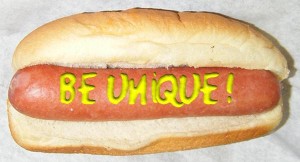 Remember when television was about the lowest common denominator? Remember when the radio station that won was “the one station that everybody at work can agree on”? Those days – the days of aiming as broadly as possible – are toast.

Let’s focus on television, particularly because the industry focused on these words of wisdom from the Television Critics Association winter confab:

However, the next sentences might be even more important, so here’s the whole quote from Paul Lee’s presentation: “Least objectionable television is dead. We’re at a world where passion rules, where social conversation is so important and where people can watch what they want to watch, where they want to watch it, so they’re only going to watch the shows that they really love, that they’re really passionate about.”

Passion is necessary when TV consumers have so much to choose from. How much do they have to choose from? In primetime – so 8-11pm only – we’re talking…wait for it…wait some more…1,715 series. 352 of them are scripted, with 199 of those on cable nets, 129 on network TV, and 24 on an over-the-top provider (meaning Netflix, et al.)

How do you cut through all of that clutter? You certainly don’t do it by being vanilla, by being the least objectionable alternative. You do it by (1) standing out from the crowd and (2) hitting your audience right where they live. Oh, and as much as we talk about Americans living on “Main Street U.S.A.”, guess who actually lives there.

We all live in our own unique silos. We’re all quirky in one way or another. We all have some interests that not so many people share. Moreover, we like things in all sorts of unique combinations. Would you be shocked to know that lots of country music fans love hip hop? Here’s a smash hit video to give you a little idea. Lots of horror fans like romcoms. And on and on. Pick up the music players of five people you know and see how much different stuff you find on there. Check out their DVD collections and…okay, you get the point.

In an excellent analysis piece, the New York Times notes that TV’s biggest hopes at the moment are built around “Jesus, a pregnant lesbian, an Asian-American family. A hip-hop empire, cybercrime fighters and the last man on earth.” Good luck finding a wholesome dad or wacky Kramerlike sidekick in that group.

A companion NYT piece on Nickelodeon really drives the point home, featuring two key statements. First, you know how I love quotes, so here’s a humdinger from Nick’s programming honcho Russell Hicks, “By the time kids are eight, they have now consumed so much media that they are demanding something different.” The other statement regards the nature of the young lady that Nick cast to play a teenage girl who plays for her high school football team: she’s not an adult actress from Hollywood; she’s a teenage Texan. Are you struck more by the seeming need for authenticity in the role or by the seeming attempt to avoid the usual channels for Hollywood-based talent?

Let’s take matters in the other direction. I don’t think the Gray Lady was thinking of it as another companion piece, but it also observes that even adult content has been forced to refocus in recent years. While noting that Playboy’s print circulation is down to about 17% of its peak number and Penthouse is down to 2% of its zenith, the NYT article discusses how each has become more “artistic”. Not surprisingly, America’s newspaper was focusing on the gentler side of adult content. I’ll simply note Rule 34 – if it exists, there is porn of it – and leave you to ponder the growth of more targeted adult product to whatever extent you wish.

The real point – for all media – is this: vanilla is somewhere between dying and dead. To win in entertainment, you’ve always had to create compelling content that connects emotionally with an audience. To win in The Jetsons Future, you’ve got to hit your audience where they live. They don’t live on Main Street. They might live somewhere nearby, or they might live very, very far away from Main Street, but they live in their own unique worlds.

The days of broadcasting – and in this use, I’m referring to the days of creating content for a massive, mass audience – are over. The days of needing a 20 rating just to break into the top 20 are long over. These are the days when a rating in the low sixes makes you a certifiable genius. We might talk about “the demo” being 25-54 or 18-49, but the fiction that there was absolutely anything that bound an 18 year-old male and a 49 year-old female into one “like-minded” demographic cell is long, long gone.

These are the days of narrowcasting, of targeting a very specific audience that will identify with your content and with its characters.

You accomplish that by being unique and being distinctive. Give your audience something great that it hasn’t seen before.

Once upon a time, you had to fit in. In The Jetsons Future, you need to stand out.

What can you do that Diddy didn’t?